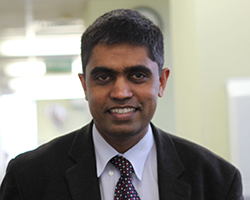 MD FRACP FRSM FAHA FAAN FRCP (Edin) FRCP (London) is a senior Neurologist and the Director of the stroke Unit, Neuroscience Research Unit, Movement disorders program at Western Hospital, Melbourne. Dr Wijeratne is a Professor in Neurology and clinical Associate Professor in Medicine, Western Health Clinical School, and University of Melbourne, Australia. He was also one of the four Australian neurologists selected for the Master of headache program, Asia Pacific Headache Master School, Tokyo, Japan 2013 which was organised by the International Headache Society. He was awarded with the “Master of Headaches” by the International Headache Society early 2014. Dr Wijeratne is a joint secretary, Australia and New Zealand Headache Society, Australia which was established in 2014. He was nominated and elected as a fellow, American Academy of Neurology early 2014. Dr Wijeratne has published 52 papers to date. He has presented more than hundred international lectures in various parts of the world.